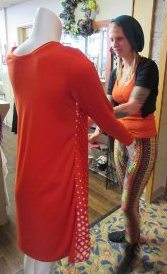 Brittany Kerr, 30, adjusts the dress on a mannequin in the Women of Worth ReShop in Nevada City. Kerr is working and has a temporary place to live, after stabilizing her life and that of her four children at Hospitality House and the Salvation Army’s Booth Family Center — both supported by the “Leap of Faith” matching fund campaign.

Thank you so much for your prayers and encouragement during this campaign! Our results show what faith, prayer and hard work can achieve: $17,680 has been donated by the generous people of western Nevada County, far surpassing PEACE’s goal for this campaign of $10,000.

With the seed grant from PEACE, made possible by the generosity of the late Lee Renz, we will give $27,680 to the Salvation Army’s Booth Family Center and Hospitality House (minus a small fee for online donations). We believe these organizations — like so many workers of good in our community — are the face of Christ to our homeless neighbors.

“We’re grateful we have a community that wants to know about the needs of the homeless and is willing to step up,” said Social Services Director Sarah Eastberg of the Salvation Army.

Meanwhile, formerly homeless people who have been profiled in the “Leap of Faith” series continue to make progress in their lives, built on the foundation of stability provided by the Booth Family Center and Hospitality House:

Donations to “Leap of Faith” totaling $16,250 (as of April 4) come just as the Booth Family Center and Hospitality House lose $608,000 in federal grants. In fiscal year 2016-17 starting July 1, new state guidelines will shift such grants from rural areas to urban centers, where homeless populations have exploded.

Booth Center’s $108,000 grant made up more than half its yearly budget of nearly $200,000 to house nine homeless families at a time in a converted motel, Eastberg said.

Tony Beverly, 60, center, is learning how to be a volunteer broadcaster at KVMR Community Radio in Nevada City, taught by veterans Greg Jewett and Elisa Parker. Beverly is thriving after getting a boost on the path to stability from Hospitality House — supported by the “Leap of Faith” matching fund campaign.

At Hospitality House, a grant of $400,000 made up nearly half its budget of $900,000 to keep 70 people off the streets every night, Development Director Debbie McDonald said. A new thrift store, set to open later this spring, will make up some of that loss.

With the “Leap of Faith” donations, Booth’s Eastberg said with relief, “we can pay the electricity bill for the entire year.” That covers lights, kitchen appliances, laundry facilities, hot water heaters and mini-refrigerators the rooms, and internet connection “so the parents can look for jobs and our 21 kids can do their homework,” she added.

The campaign put a face on the homeless, Hospitality House’s McDonald said. “People are so excited and encouraged to know that homeless people are getting back on their feet,” she explained. “People feel hope that this change is possible.”

Learn more about “Leap of Faith.”

Learn more about PEACE in our community.

Learn more about worship at PEACE.