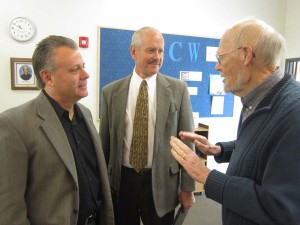 People released from state prisons are less likely to reoffend now that counties are supervising them after their release, a Nevada County official said.

Faith congregations can help reduce recidivism even more by offering support to offenders coming back into society, officials told those gathered at a recent session of the Contemporary Issues Study Group at Peace Lutheran Church in Grass Valley. The group’s new topic is “Issues Facing Our Local Officials.” Substance abuse, housing, employment and education are the biggest hurdles facing Nevada County residents getting out of state prison, said county Chief Probation Officer Michael Ertola. Families and the mentally ill also need support from the faith community, county Sheriff Keith Royal added. The erosion of the family unit, accelerated by drug abuse, leaves children without “guidance in the home. Accountability is a big problem,” Royal said. “When they graduate (from high school), they’re mine” – a reference to arrests on drug, burglary, theft and similar charges.

Since October 2011, county officials have been supervising low-level offenders coming out of California prisons in a program called “realignment.”

The county Probation Department, like others across California, has started to use an evidence-based risk assessment program to deal with the increase in its caseload created by realignment, Ertola said. In Nevada County, 88 offenders have come back to the county through the program. The risk assessment – which includes an in-depth interview – helps probation officers focus their resources on those most likely to re-offend, Ertola said. None of the low- to moderate-risk offenders coming to the county through state realignment has committed new crimes, Ertola told the Contemporary Issues Study Group.

So far, 32 offenders have completed their probation, 10 finished their sentences in county jail, and four returned to state prison after committing new crimes, he added. Statewide, recidivism of realigned offenders was 42 percent through June 2013, Ertola said. That’s down from 61 percent in 2009 for all people released from state prisons – a decline that prompted Ertola to call realignment “a success.”

Offenders coming back into society could have even more success with help from faith groups, Ertola and Royal said. Programs exist for drug rehabilitation, subsidized housing, adult education and finding honest employment; but none fully meet the need, Ertola said. All five remaining sessions of “Issues Facing Our Local Public Agencies” are free and open to the public.

Other speakers will include:

Sessions begin at 9:15 a.m. Wednesday mornings and include a question-and-answer session until 10:45 a.m.