ABOUT PASTOR JOHN and RWANDA 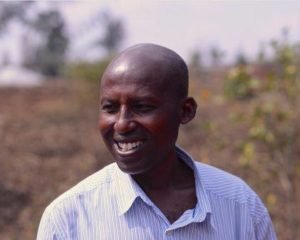 The Rev. John Rtinsindintwarane helps people organize to improve their lives in Rwanda.

John Rutsindintwarane was born in Tanzania on February 19, 1963 – four years after his parents had fled Rwanda to escape violence there.  His father died two years later. John was raised by his mother, Kabasinga Beltirde, in the Nkwenda/Kimuli Refugee Settlement.  Although the primary school he attended was very limited it did have a small library including books donated by churches in America. John still remembers eagerly reading many of these books, including a primer on American history. He attended secondary school in Bukoba, Tanzania where he excelled, but when it was time to enroll in college he was denied a governmental scholarship because he was a Rwandan refugee.  Still he persevered and managed to attend Katoke Teachers Training College also in Bukoba and then St. Paul’s Theological College in Kenya where he earned an Advanced Diploma in Theology.

In early 1994 John was ordained as a pastor in the Evangelical Lutheran Church of Tanzania and was sent to serve in Ngara, Tanzania.  In April 1994, just a few days after Easter, he witnessed the exodus of many thousands of Tutsis fleeing the genocide in Rwanda by way of the Rusumo bridge, many of whom were directed to the Benaco Refugee Camp where John was already helping refugees. Tony Waters, a member of Peace Lutheran Church, was also helping refugees at Benaco, where the two connected and became friends.  John also served as a translator for the Tanganyika Christian Refugee Service under the auspices of the Lutheran World Federation.

The genocide in Rwanda caused John to experience a deep crisis of faith.  Where was the church when Rwandans were killing Rwandans, Hutu against Tutsi? Where was God? What, if anything, could he do to help? Ultimately, he felt called to personally take refugees back to Rwanda. But when? Many discouraged him from such a dangerous mission, but Tony was one of the few to encourage him to go.

Miraculously, in September 1994 the U.N. High Commissioner for Human Rights asked John if he would be willing to act as translator for a delegation being sent by the Archbishop of Canterbury to assess the status of church relief programs in the Rwanda.  John eagerly agreed and this assignment enabled him to assess how he could best repatriate Rwandan refugees.

Upon returning to Tanzania, John organized and accompanied some of the very first refugees to resettle in Rwanda.  The Rwanda to which they returned was a nation in ruins and still in turmoil.  Thousands of bodies lay decaying along roads and paths and floating in waterways.  Many homes and churches and crops had been destroyed. Returnees frequently discovered that their families were among the hundreds of thousands mercilessly slain in less than a hundred days.  Even as Tutsis began to travel back to Rwanda, many more Hutus were fleeing the country fearing retribution for the atrocities committed.

Pastor John was witness to all of this and asked what could be done to prevent this evil from ever happening again?  In his own words:

“The violent legacy of genocide, civil war and of an authoritarian state … caused poverty, political instability, and social and spiritual fragility.” – Pastor John

As a first response, he and four other Rwandan leaders of the Lutheran Church in Tanzania formed the Lutheran Church of Rwanda in 1995. The church has now grown to include an estimated 40,000 members whom John faithfully served as General Secretary and Assistant Bishop.  John was actually elected Bishop but declined, since he wanted to continue to devote most of his time and efforts helping people to live and work together in harmony regardless of ethnicity, social status or religion.

In 1999,  John came to America and shared his vision with a number of Lutheran congregations.  Because of his friendship with Tony Waters he also visited Peace Lutheran church in Grass Valley, where he expressed his desire to continue his education to prepare himself for his return to Rwanda.  There he would help his people, both victims and perpetrators of the genocide, to reconcile and flourish together.

In response,  the Rwanda Connection Committee was established to help the people of Rwanda in general and to support Pastor John and the Lutheran Church of Rwanda in particular. As a first step it was agreed the church would provide funds for John to earn a Master’s Degree in Conflict Transformation at Eastern Mennonite University in Virginia.  While there, he met and eventually married Robin Strickler, who would later found the Rwamagana School in Rwanda, a secondary boarding school which we also have supported.

John would go on to earn a second Master’s degree in Theology, Evangelism and Community Development at Wartburg Theological Seminary in Iowa.  From there he received further practical training at the Pacific Institute of Community Organizing (PICO) in Oakland, CA.  He returned to Rwanda in 2006 well equipped to put his new knowledge and skills to work.

Organizing the needs of communities

Over the years John has refined and perfected his approach to organizing communities.  Explaining his approach, he first invites the people of a community to gather and discuss their needs, not their wants, by using one-on-one conversations. He then helps the group to identify and prioritize those needs, and to agree on their most important need.  Then he asks what, if anything, they have done to meet that need.  In most cases, they reply that they have asked the government to help without success. John then asks what have they done to help themselves.  If they say nothing, or very little, John suggests ways that they can begin to do so on their own.

For example, if their need is for a health clinic, he may suggest that everyone begin by gathering stones for the foundation.  Once they have piled up enough stones he will introduce them to people who can show them how to lay the foundation.  This process will be repeated for raising the walls, installing the roof, etc.  The people begin to take pride and ownership in their project as it takes shape.  John will then advise that they hold the government accountable and ask only for what the people cannot provide themselves; e.g., staffing of doctors and nurses.  In his experience the government will generally be accommodating under those circumstances.

In fact, Pastor John has enjoyed remarkable success with this model for organizing communities in Rwanda and helping them to meet their own needs. To date, several communities have helped themselves by building health clinics, schools, community centers, and roadside markets (equipped with public restrooms for travelers). He has also helped villagers, especially women, to form cooperatives to make and sell such goods as roofing tiles.

Some of these communities that he has helped are now taking the lead in helping neighboring communities by showing them how they too can organize and improve their own communities.

Neighbors are now helping neighbors no matter if they are Lutherans, Catholics, Adventists, Christians of every type and expression, including those who are Muslims – Rwandans whether Hutu, Tutsi, Twa, – victims or oppressors. John’s vision for Rwanda is becoming a reality – one village at a time.  More often than not, a village was chosen because it had been the scene of some singularly horrendous act of genocide; villages such as Rusumo, Nyange, Nyamata, or the latest to be organized, Nyarubuye.

Thanks to John’s faithfulness in pursuing his God-given vision and mission, villages such as these are now blessed with a new health clinic, public market, school or whatever the people of the village, whether victim or offender in the genocide of 1994, have organized themselves and built together.

To God be the Glory!