NO TAIZE EVENING PRAYER in December. Instead, please come to our December Mini-Concert at 5:30 p.m., followed by Holden Evening Prayer at 6 p.m. 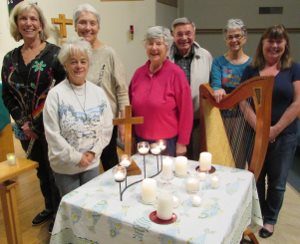 Worship leaders offer evocative music with flute, harp and voice during the Taizé-style service on the third Wednesday each month at PEACE Lutheran Church.

Candlelight, periods of silence and music from harp and flute mark the Taizé-style evening prayer offered at 6:30 p.m. on the second Wednesday each month at PEACE Lutheran Church.

Short, simple prayers chanted to sacred, yet easily learned tunes evoke the human yearning for connection to the Divine. This form distinguishes the worship style inspired by a Protestant monastic community in France. One example of a sung prayer is the chant “Veni Sancte Spiritus,” with just five eager words: “Holy Spirit, come to us!”

Bible readings keep the focus on God’s word, offering peace to all people on earth. PEACE musicians lead the worship with music sung in harmony.

Embrace the Mystery of God’s Love!

WHEN: 6:30pm on the Second Wednesday of each month

WHERE: PEACE Lutheran Church, in the Sanctuary

The distinctiveness of Taizé is the simple songs that are repeated frequently. This short, simple prayer service leaves participants feeling lifted up and at peace.

All are welcome, regardless of religious tradition or affiliation. Peace’s Taizé service coordinates with another Taizé-style worship offered at 6:30 p.m. on the first Wednesday of each month at Nevada City United Methodist Church.

The Taizé community developed in the 1940s in the village of Taizé, in German-controlled France. Members helped Jewish refugees fleeing, ministered to prisoners of war and attended orphans, according to the Taizé community’s website. Swiss-born, Protestant founder Roger Schutz sought to form a community of men who would live simply and celibately, in service to God.

“Ever since I was young, the intuition that a life of community could be a sign that God is love, and love alone, has never left me.” Taizé founder “Brother Roger” wrote these words on the community’s website before his death in 2005. 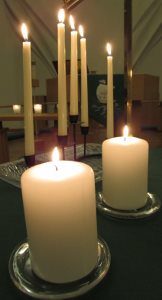 Candles and music evoke an atmosphere of tranquil mystery during the Taizé-style evening prayer service, at 6:30 p.m. on the second Wednesday each month at PEACE Lutheran Church.

The Taizé brothers’ message especially appeals to young people. They gather at the community in the tens of thousands, according to news reports. Music written for the prayer services has become popular in churches around the world.

Silence forms a part of those services – but it can be uncomfortable for modern seekers accustomed to constant engagement. In PEACE’s Taizé-style worship, silence invites participants to deepen their engagement with God.

“Silence teaches us that prayer is not only a conversation involving words, but is also a stance of openness and listening for the voice of God,” reads “Worship Formation & Liturgical Resources” from the Evangelical Lutheran Church in America.

You are welcome at Peace!