Home > News & Events > Take a “Leap of Faith” for the homeless! > Leap of Faith: Kelly Mongiardo

Domestic violence victim finds a safe place of her own 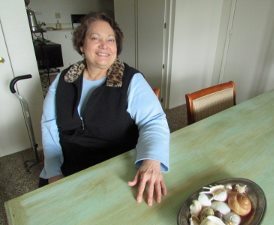 Kelly Mongiardo, 63, now is in a safe, bright and comfortable place of her own, after getting help from Hospitality House. The “Leap of Faith” campaign sponsored by Peace Lutheran Church in Grass Valley is raising $10,000 to help people like Mongiardo on their path from chaos to stability.

Kelly Mongiardo’s light-filled living room looks out over green trees and sculpted clouds. It’s a lifetime away from the violence-filled rooms she escaped four years ago.

After Mongiardo’s nearly fatal flight, Hospitality House – Grass Valley’s homeless shelter – gave her a haven for healing and a launch pad for the next chapter in her life.

“A safe place to sleep and food to eat – that is quite something when you have no place to go,” said Mongiardo, now 63.

Being homeless was an odd position for a woman who had put herself through college. Mongiardo had worked for the U.S. Centers for Disease Control in Atlanta on some of the earliest breakthrough research on HIV/AIDS. She raised a son by herself and later became a paralegal.

Mongiardo remarried later in life. Savagery in that relationship came as an ugly surprise, but victimization sends down roots unnoticed, and the couple’s home was remote; it all lasted nearly seven years, she said. Social workers know that danger in such relationships peaks when the victim tries to leave.

The night Mongiardo left nearly four years ago, her husband tried to break her neck, choked her twice and, when he got her onto the ground, kicked her viciously, she said. But through a force Mongiardo described as divine intervention, she was able to get up and away. She fled by the night of the moon but fell, crushing her wrist, wrecking her ankle, cutting open her face and suffering other injuries.

DONATE NOW! Click here to donate to the “Leap of Faith” Matching Fund Drive and help people like Kelly.

Mongiardo had the first of five surgeries to repair that night’s damage, then recuperated at a local safe house for domestic violence victims. Her disability income didn’t reach the costs of an apartment, so she took refuge at Hospitality House.

“My ankle was in a boot, my left wrist was in a brace, and I’m left-handed,” Mongiardo said. “I was using a walker. I was a mess.”

The basics of food and shelter gave way to next steps at Hospitality House: A counselor who helped Mongiardo on her healing path; medical check-ups and prescriptions from a local clinic; representatives from local agencies who get people signed up for services; and the opportunity to save her money.

On her way to advocacy

After two months, Mongiardo found an apartment, with first month’s rent and security deposit paid by Hospitality House’s Rapid Rehousing program. Social worker Tom Kellar continued to check up on her for another year, making sure she was getting her disability checks and paying her rent. After two years at that place, Mongiardo moved into a nicer one. 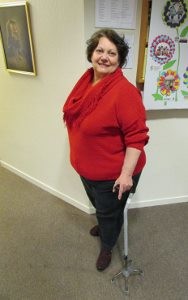 Kelly Mongiardo remembers the spot where she would lay her sleeping mat when Hospitality House, during its nomadic phase, brought guests two or three times a month to PEACE Lutheran Church in Grass Valley. The “Leap of Faith” campaign sponsored by PEACE Lutheran Church is raising $10,000 to help people like Mongiardo on their path from chaos to stability.

“You start where you start, and you get things going,” Mongiardo recalled. “You go in with a positive attitude that you’re going to make it and take advantage of their services.”

Mongiardo still has health issues, yet views her experiences as a call.

“Being homeless made me a stronger woman,” Mongiardo said. “It was difficult, and it was scary, but I have never felt closer to God…

“I know that (homeless advocacy) is one of the things I am meant to continue to do,” she added.

Click here to return to the “Leap of Faith” home page.