Home > News & Events > Take a “Leap of Faith” for the homeless! > Leap of Faith: The Campbells, homeless no more 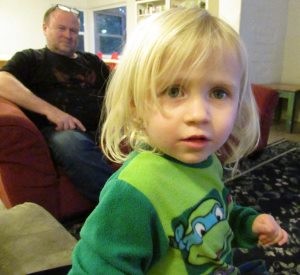 Lanaya Campbell, 2, was born into homelessness, but the family recently moved into an apartment, with help from the Salvation Army’s Booth Family Center. Her father, Aaron Campbell, is in the background in the common room of the Booth Center, near Grass Valley.

All Aaron Campbell wants is to give his two young children a better life and some good memories – visits to the playground, a monster truck show, camping and fishing, maybe a trip to one of those big amusement parks.

After more than seven years of being homeless, and thanks to a lot of help from the Booth Family Center and Hospitality House, Campbell laid the foundation for all that: He recently moved into a two-bedroom apartment in Grass Valley. Next up: finding a job that pays enough to support his children.

“I’m grateful for the people out there in the community who want to help the homeless,” Campbell said, as 4-year-old Ryker turned a cartwheel and 2-year-old Lanaya cuddled on a visitor’s lap.

Campbell, 49, is aware of the attitudes toward homeless people held by many who are concerned about crime, drug abuse, garbage, panhandling, wildfire and other ills.

“Not all of us are bad people,” he said, as Ryker showed how fast he can run across the sitting room at the center for homeless families operated by the Salvation Army. “A lot of homeless people out there are pretty ‘iffy.’ But there are some people out there who are trying to make a difference in their lives.”

The Campbells are among 29 families who in 2015 lived at the Booth Center – a converted motel west of Grass Valley where entire families live in one little room for up to six months. Those families last year included 60 children, said Social Services Director Sarah Eastberg.

“There are some (homeless) people out there who are trying to make a difference in their lives.” – Aaron Campbell

Also in 2015, the Campbells were among 443 people who stayed at Hospitality House – the 54-bed homeless shelter in Grass Valley’s Glenbrook Basin. During cold weather like now, the shelter lays down another 15 mats nightly on the dining room floor. Last year, that pushed the client population to more than 19,000 bed-nights, said Development Director Debbie McDonald.

Both facilities will benefit from the “Leap of Faith” funding campaign to raise $10,000, matching another $10,000 granted by Peace Lutheran Church, in Grass Valley. Western Nevada County residents are being asked to contribute – see the box for details.

Aaron Campbell’s journey to homefulness took many turns. He survived a rough childhood and drove long-haul truck for 15 years. When the economy collapsed in 2008, and companies sought to cut costs, Campbell and other older, higher-paid truckers at his Oregon-based company were laid off. 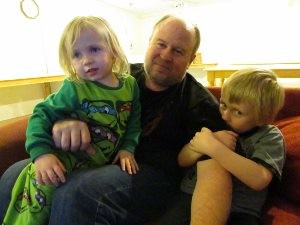 Ryker Campbell, 5, peeks over the arm of his father, Aaron Campbell, 49, while sister Lanaya Campbell, 2, plants daddy a kiss in the common room of the Salvation Army’s Booth Family Center for homeless families, near Grass Valley.

Employment with an old school buddy brought Campbell to Nevada County, but when that didn’t work out, he checked in to Hospitality House. After a while there, he set up camp on Bennett Hill, an area off Bennett Street in Grass Valley called home by transients since at least the Great Depression of the 1930s.

Campbell’s little encampment soon attracted others who wanted safety and quiet, away from the drugs, alcohol and violence often found at other encampments on the hill, he said.

“I’d never been homeless before in my life,” Campbell said, but he soon became a force on the hill for cleaning up garbage and creating a semblance of order. “I got to learn a little bit more about people,” he added with a rueful chuckle. “I got to the point where I saw somebody had to stand up for what was right.”

Campbell and a fellow camper became parents when Ryker was born nearly five years ago. The family cycled through trailer parks, motels, Hospitality House, the Booth Center and the home of a friend, while Campbell earned cash at odd jobs. The family lived in a travel trailer for a while, but that was destroyed in an electrical fire, Campbell said. Finally, when Lanaya was tiny, his partner’s mental issues and painful past led to drug abuse, crime and danger to the children, and the couple split up.

Campbell returned to the Booth Center, children in tow. He also was able to get knee replacement surgery, with help navigating the insurance system from the Booth Center. That step will help him get back to work, which he is seeking through Calworks, he said.

He could not have made it this far without the stability offered at the Booth Center, Campbell added. “Being here…” Campbell shook his head and hugged his squirmy kids. “I’m so glad and thankful the Booth Center is here… It’s a helping hand, just to take a couple steps so I can do something with my life. Everything’s finally coming together.”

Double the gift of love

Click here to donate to the “Leap of Faith” campaign.