Home > News & Events > Take a “Leap of Faith” for the homeless! > Leap of Faith: From heroin to healing 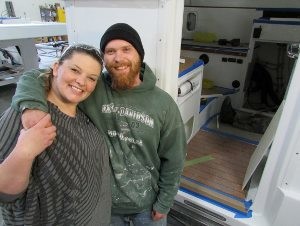 Keith McDermid, 26, right, and Kayla Sylva, 28, are learning new skills to hand-build high-quality campers like this one at XP Camper, a Grass Valley manufacturer that exports all over the world. The “Leap of Faith” matching fund drive supports the local services that helped the couple move from chaos to stability.

Snow lay all around, and Kayla Sylva thought about what Hospitality House had done for her hard-fought sobriety of five months.

“If I were still out there on the street, I’d be getting loaded right now, just to deal with this,” said Sylva, 28.

Instead, she and her husband have full-time jobs where they are learning new skills. They have a room of their own in a beautiful house, where they are building a history of financial reliability. Sylva recently got long-needed dental care and is whittling down traffic fines.

Keith McDermid, 26, Sylva’s husband of two years, has been sober for a year. Most importantly, McDermid added, “I’ve got my son back in our lives.”

Sylva’s journey from dealing heroin and methamphetamine to fund her meth habit, and McDermid’s road from drinking, fighting the police and landing in jail, turned a corner when they got a warm bed on a cold night at Hospitality House, Grass Valley’s homeless shelter.

It was December 2015, Sylva had just finished two months in rehab, and the couple had nowhere to go. McDermid had roots in Grass Valley; he had stayed at Hospitality House in the past and knew all it had to offer.

So they checked in.

“Everybody boosted our self-esteem,” Sylva explained. “Addiction had destroyed it.”

Hospitality House offered 12-Step groups, spiritual counseling and representatives from local agencies signed them up for services and financial aid. Sylva and McDermid attended Hospitality House’s culinary program, and Sylva graduated with honors –learning about both food and life, she said. Recreational activities such as playing Bingo and telling riddles made them feel part of a community.

When they returned from 12-Step meetings outside the house, monitors would ask encouragingly to see the incentive chip Sylva had earned for 90 days of clean living. That was backed up by daily checks for alcohol and random drug tests.

“They would keep us accountable,” Sylva said. “We really, really needed that.”

Hospitality House’s rapid rehousing program found the couple a room in a shared house in a regular neighborhood.

It’s a stop on their way to a new life of sobriety and stability.

Sylva’s journey started when she left home at 13. She lived on the streets of Stockton, Calif., and shaped herself into a tough girl who commanded respect. Selling heroin was better than selling her body. 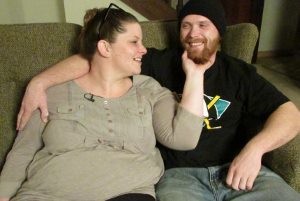 “I feel good about where I am now,” said Keith McDermid, 26, right, at the home he shares with his wife, Kayla Sylva, 28, and other people transitioning from homelessness to stability – thanks to the rapid rehousing program at Hospitality House, Grass Valley’s homeless shelter. The “Leap of Faith” matching fund drive supports that work.

“I was getting pretty deep,” Sylva recalled. “I was hanging out with people who would kill me.”

McDermid’s road began with his first drink at 11 of shoplifted booze. He got to the point where he “smoked pot all day long” and could daily down an 18-pack of beer, unleashing an angry and combative “Mr. Hyde,” the usually quiet man said. Attempts to sober up failed.

As a couple, they had periods of sobriety. “But for some reason, we’d always fall off the wagon,” Sylva said. “We never worked on ourselves, and that’s why we were getting loaded.”

When McDermid finally had enough, he sobered up at Hospitality House. The house gave him a suit, and McDermid found a job.

Now, “we are active in our recovery. That’s what’s different,” Sylva said. “I have God in my life. God saved my butt out there.”

They count their blessings, McDermid added, and look forward to giving back.

“I’m so grateful to the people of Hospitality House,” Sylva said. “They’ve helped us to feel better about ourselves, and we’re trying to be better.”

Click here to return to the “Leap of Faith” home page.