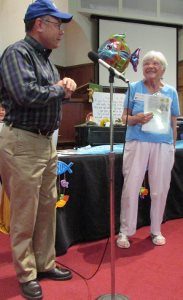 General Manager Rem Scherzinger, of Nevada Irrigation District, tells children and their parents gathered for the closing of Earthcare Day Camp in Grass Valley, about NID’s inspiration to donate $350 to their effort to buy a hand-operated water pump for poor children in a developing country. Camp co-director Barbara Dean looks on.

Children at Earthcare Day Camp in Grass Valley hoped their small change collected from family and friends would reach $350 to buy a hand-operated water pump for poor kids in another country.

To campers’ amazement and delight, two local outfits stepped forward to contribute. In addition, small change and an anonymous donation poured in.

Now, the children will contribute $1,400 to buy four water pumps through UNICEF – the United Nations Children’s Emergency Fund. The pumps often are placed near schools in developing nations. That way, children can both attend school and fetch clean well-water for their family’s needs, said camp co-director Barbara Dean.

Justin Peters, vice president of Peters’ Drilling & Pump Service in Grass Valley, learned of the camp kids’ goal through an article in The Union earlier this week. Inspired, Peters quickly delivered a check for $350.

“It’s neat to see people teaching kids how precious water is,” Peters said. “These kids are having fun at summer camp, but also learning something about humanity and giving back.”

“These young folks were thinking outside of their normal world and looking to support other people through community service. We at NID see ourselves as being in that mode,” Scherzinger explained. “We’re just so proud of them.”

Meanwhile, campers gathered at Grass Valley United Methodist Church added up their coins and dollar bills collected during the week. Their total came to $618 – and a third donor from the church topped that to an even $700.

Children whooped, cheered and clapped late Thursday when they heard the news that their efforts would buy four pumps instead of just one.

Earthcare Day Camp was organized by five local churches to teach children how they can take good care of sacred creation. Properties of water, light and the beauty of nature were presented through science, storytelling, crafts, recreation and service.