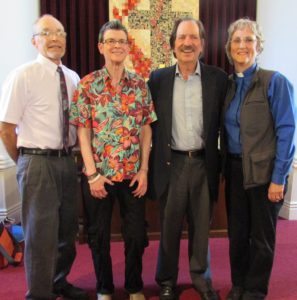 From left are Auburn physician Dr. Michael Mulligan, Santa Clara University ethicist Margaret McLean, Newcastle attorney Paul Comiskey, and Grace Lutheran Church, Lincoln, pastor Rev. Judith Morgado, who organized a seminar in Lincoln on Saturday about California’s new End of Life Option Law. The speakers (pictured) said people need to have conversations now with family and physicians about their health, values and what kind of medical care they want to receive near death.

Talk to your loved ones and your doctor about the medical care you want to receive as you approach death. Then, write it down.

It’s a tough conversation that will avoid family anguish and a “death that is not with dignity, expensive and not at home,” said Dr. Michael Mulligan of Chapa-De Indian Health in Auburn.

Such conversations are being sparked by California’s new End of Life Option Law, which went into effect in June.

Beyond its controversy, the new law can be “a springboard to advance care planning (and) to important conversations about values, about health, about what sorts of medical interventions you would want if you could not decide for yourself,” wrote bioethicist Margaret McLean, of Santa Clara University’s Markkula Center for Applied Ethics.

These discussions shine new light on the larger field of care available to people near the end of life or suffering chronic illness. While the quality and availability of hospice and palliative care is improving, “huge gaps” remain, Mulligan said.

Pain management for terminal and chronic conditions is an important patient concern that can and should be addressed in palliative care, both added.

“Pain management should never be the sole driver of aid in dying,” McLean said.

The new law allows terminally ill patients to ask their doctors for a drug they could take themselves to bring death. McLean, Mulligan and Newcastle lawyer Paul Comiskey offered their thoughts on the law and the broader state of medical care during a seminar Saturday organized by Grace Lutheran Church in Lincoln. The seminar was funded by the Lutheran Development Society of Sacramento, Thrivent Financial and United Methodist Women.

The End of Life Option Law “is really an opportunity… to have a conversation about our values,” said McLean. Start those conversations “early in your adult life,” Mulligan added.

Both encouraged people to document the results of those conversations. They advised these steps:

People in generally good health of any age should complete an Advance Directive. It outlines wishes for future care and appoints a legally recognized health care representative.

People who face serious illness or frailty also should complete a POLST (Physician Orders for Life-Sustaining Treatment). It covers current care in greater detail and directs the course of emergency care.

Have copies handy at home, and give them to health care providers.

California’s new law “is an indictment of the state of affairs for end-of-life medical care,” Mulligan declared.

Many options could relieve symptoms near the end of life, short of ending suffering through aid-in-dying drugs. But “California falls woefully short in providing access” to such care, McLean added.

Hospice cares for people with fewer than six months to live, making them comfortable and easing their passage. Palliative care is similar: It provides comfort and treats symptoms without heroic measures like surgery, but patients may live for years with their conditions. Both areas offer “an easier route” for people with fatal and chronic conditions, Mulligan said.

Yet, “hospice care is under-used. We have huge gaps in what we have available,” Mulligan said.

“Palliative care is a new field, and there are not enough specialists available,” Mulligan added. “So (end-of-life care) is falling to primary care doctors, who are not well-trained for it and don’t have a lot of time.”

In addition, insurance companies may not cover the costs of palliative medication or helpful services such as home visits by nurses, Mulligan said.

Having more low-impact options for end-of-life care short of life-ending drugs, and having them covered by insurance, would increase the dignity of death and cut the cost of health care nationally as Baby Boomers age, speakers said.

Doctors, patients and their families face a dilemma when mulling the End of Life Option law, Mulligan said.

The arguments in favor of the law: “It’s a compassionate act in the face of terminal illness,” Mulligan summarized.

As terminally ill patients weigh their options, McLean added, “We question what counts as harm. Is death always the harm we think it is?”

The arguments against the law: “It violates deeply held values of the sanctity of life,” Mulligan summarized.

Actions taken under the new law could become complicated by factors of race, economics and faith, McLean added.

“Will assistance in dying be morphed into insistence on dying?” McLean pondered. “Will patients be treated as less than persons on the basis of diagnosis?”

In addition, the law impacts the trust that undergirds the doctor-patient relationship, Mulligan and McLean observed.

Mulligan encouraged doctors to converse with patients about the range of possibilities in end-of-life care that could make a choice for life-ending drugs unnecessary. “I found (such conversations) very rewarding,” he said

* Attitudes vary depending on how the question is phrased, studies reveal.

In 1997, Oregon became the first state to enact an aid-in-dying law. Statistics over nearly a decade show few terminally ill patients use the provisions of the Death with Dignity Act (see box).

In addition, a surprising number of patients who do ask their doctors for a life-ending drug don’t take it, Mulligan said. Those patients often report feeling less stress and greater peace with their dying process as they continue receiving palliative measures, said Newcastle lawyer Paul Comiskey.

“It provides a certain level of reassurance that there’s a Plan B,” Mulligan added.

Worries that the act would “open the floodgates” to suicide and be pushed onto poor patients have not borne out in Oregon, he added. On the contrary: Most people who died under the act’s provisions are older, white,  educated, well-insured

That largely reflects the cumbersome and costly nature of achieving death under Oregon’s act, Mulligan explained. Multiple doctor visits and the cost of the death-dealing prescription run to about $4,500, he said.

About Advance Care and POLST documents

About Hospice of the Foothills