Some years ago, we did some fall landscaping around our home.  I’m sure you know that routine.  We did some leveling, and then killed the grass and weeds with ROUNDUP® so nothing could possibly grow.  Then we put down heavy black plastic, to keep the sun out, the weeds and stuff from growing, and the moisture in – too damp to grow stuff — and the ground cool — too cool to sprout seeds.  And then the whole thing was covered with a layer of rock.  With all that it became impossible for anything to grow except the shrubs and few plants that we’d allowed to poke out through the plastic.

The following spring, a week or so before Easter, I was standing on the front porch looking at the landscaping, enjoying the spring beauty.  As I scanned the area, I noticed a lump in the plastic there in front of the house.  It was about half the size of a basketball.  The rock had slid off the peak of the little round lump.  The lump in the plastic made me curious.  What could it possibly be??  It had to be an animal of some kind.  I went down, cautiously and carefully knelt down to poke it.  It was firm, seemed full and had some resistance.  But it didn’t move back.  It didn’t feel like earth — not that solid, but then it was not soft enough to be a tree or something pushing up — besides it had a round top, not a peak.  In fact, it looked sort of like one of those worms from the movie “Tremors” (which, by the way, we’d just viewed a week or so before) was just starting to poke its head slowly up from under the plastic.  Now that made me cautious!!!!  In fact, I delayed pursuing the issue until I mustered up a bit more courage. 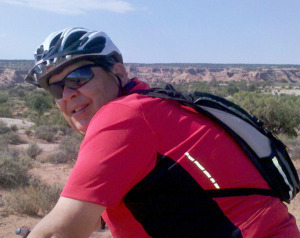 A few days after Easter I got up the nerve to take a closer look.  I got down and carefully scrapped the rock off the area so I could lift the plastic and peek under.  And then, just in case it was some beast or “tremors worm”, I ever so carefully lifted up the corner of the plastic and looked under.  And there I witnessed the impossible.  It was ….

Well, it was a clump of yellow green leaves.  A big clump of yellow green leaves.  Leaves of the “Magic Lily” or “Mystery Lily” or sometimes called “resurrection lily” that we thought we’d moved.  A Lily we’d almost completely forgotten about.  This lily had gown, yellow for lack of light, but strong and purposeful enough to make it’s presence known.

Jesus is alive!  The grave did not hold him.

During the next 50 days, the period of Easter, we continue to rejoice in the wonders and power of God and in faith claim the resurrection life God has come to offer.