It seems there was once a substitute organist who wanted to get the job full-time. So she asked the pastor what she might do to enhance her possibilities.

The pastor indicated that the organist might want to play some appropriate music while the people reflected on the invitation and their decision.

The sermon came. The pastor made his point.

As the appeal was issued, the organist began the national anthem.

The budget of the church was quadrupled.

The organist was issued a lifetime contract.

Are you ready for Christmas? I may think I’m ready. The presents are mostly purchased and wrapped. The choir music is ready. The worship services are written the sermons outlined. The kids are beside themselves, making parents more than ready.

We’re not ready because there is yet a mystery: “Among you stands one you do not know.” It’s the mystery that John invokes as he preaches a baptism for the forgiveness of sins. It is the root of my question for “Signs and Season”, “Who (or what) stands before us?

A student, it is said, came to Pr. William Willimon, Chaplain at Duke University. The student confided that he was taking a course in Italian Renaissance Art. He said the he loved the course but that the course had also made him sad.

“Yes!! Sad!” the student replied. “You see, I spent nearly a year in Italy with my Air Force parents who were stationed there. We went to all the great art galleries of Italy. We saw all the great paintings. But, since I didn’t know what to look for, I DIDN’T SEE A THING!” 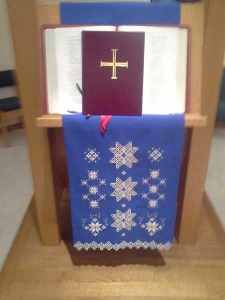 I get the feeling that we don’t always know what to look for in Advent. In the middle of our human emotions for the season, in a time when we are supposed to be all excited and merry and we may not be, when exhaustion with the expectations of the season over takes us, we simply don’t know what to look for. We hear the carols and the message. This season is about light and hope. We look around. We are captivated by the tinsel, the glitter, the decorative lighting. Our eyes are full of the grandeur of the pageants and the extravagant displays of the season.

In those days before Jesus baptism, John was the one who stood before the people. The far out, wild man, John, has a message of light.

Two thousand years ago when John first preached, John began his message with light and hope. At that time, John’s words didn’t have to do with Christmas lights — in fact, there hadn’t been enough history to even put Christmas on the map, as remember, this preparation had to do with the beginning of Jesus’ ministry, not an announcement of his birth. In fact, John’s words may not have had to do with anything that has to do with physical light and darkness. John knew his mission and ministry as something to do with the darkness of sin and death. John knew his mission as having to do with bringing hope in the wilderness that people knew as life — not a physical wilderness or a physical darkness, you see, but the wilderness and darkness that comes from not being close to God. The wilderness and darkness that comes from having lost a sense of direction, having lost spiritual bearings. John knew this darkness because it was all around him.

John also knew light. He knew from the word of the prophets that there was one who was the light. John knew by the power of God’s spirit that God was acting to bring hope and light into this darkness. John also knew he was not the light. He pointed to the light. John might not even have been sure who he was — but he did know he wasn’t the light. He knew he was a voice with a message of hope. He knew that something greater was coming. John knew that somehow, he was pointing to the light, that he was reflecting light, and thereby, hope.

Harold Lind lives just off a country road, several miles out in the country, about half way between towns (Rush City and Cambridge, MN). Harold made it his practice to always illuminate his front porch light. It could be seen from the road. It could be seen for quite a ways each way up the road, since he lived on a sweeping curve.

After several successive nights of traveling that road with late night calls to the hospital, I asked Harold if he knew his light was on — I saw something “bad” in that. Harold said, “Yes.”

He knew, you see, because Harold saw keeping that light on as part of his mission. He had a purpose in leaving that light as a sign of hope and a bit of assurance on a curve in the road on a dark night. He saw his light as a way to beacon the stranded one should there be a need in the middle of the night. And, alternatively, he saw it as a spark of hope and well being for the lonely night traveler.

I never looked at that light quite the same on late night treks across the countryside. I always saw it as a single bulb beacon of hope, a sense of well being for me as I traveled safely.

On this third week in Advent, then, we take a look at John. John stands among us with a message of hope. John stands with a word of the mystery of the one who is to come. John stands reflecting the true light, the full light of God, who invites us deeper into reflection and darkness, so that the true light that is coming will be brighter and stronger. That the true light before us will not only turn the darkness into light, but will usher in the other great reversals of God’s kingdom:

Ashes into rejoicing
Mourning into laugher
Dead grass into trees of righteousness.

The mystery is rooted in God coming to the world in human flesh. Our God in great love, full of grace, coming to us in Jesus who is light and hope. John stands before us. “John, a reflection of the light, stands to invite us deeper into the darkness so that the light will be brighter.”

The light that marks our way, the light that is full of grace and truth. The real light of God that accompanies us with hope, with forgiveness and with the fullness of His everlasting love.   Amen.