Harold Lloyd, second from left, stars in “The Kid Brother.”

Admission is by donation. All contributions go to the PEACE Organ Fund. Our goal: Replace the aging organ now in our Sanctuary. Dream with us! We hope to buy a magnificent new instrument capable of playing real pipes. With such an asset, PEACE can expand the possibilities for western Nevada County’s cultural scene! We are excited about the prospect of creating a thrilling musical experience for our community. Such an instrument will raise the level of both our worship and  secular presentations.

A FREE wine-and-cheese reception follows the movie, starting at about 5:15 p.m. Come see our beautiful and spacious Fellowship Center! We love providing our community with a gathering space where all can enjoy fellowship. Especially, you’ll enjoy the center’s view overlooking cypress and pines. 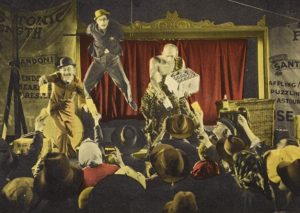 Actor Harold Lloyd gets involved with a sketchy medicine show in “The Kid Brother.”

Actor and producer Harold Lloyd plays the role of Harold Hickory, the slightly built younger brother of two muscled men. Their father is the local sheriff. Through a series of events, Lloyd’s character shows determination and wit. These qualities reflect Lloyd’s personal life. Film critic Carrie Rickey describes that continuity for The Criterion Collection, which carries the film on DVD. Lloyd rose from a bit player to the star of his own studio. Likewise, Rickey suggests, Lloyd’s on-film characters typically portray a determined and creative person. Eventually, he overcomes adversity to reach his goals.

“Made at the apex of Lloyd’s career and of silent film, it is the most lyrical of his features and, arguably, the funniest,” Rickey writes. “It’s a series of gags with a tender romance that runs through it.” In addition, the film offers “a terrifically funny and suspenseful action sequence in its third act.”

Last year, Silent Movies with Walt Strony presented “Safety Last.” If you saw that, you watched a similar story unfold. In that 1925 classic, Lloyd dangles from a clock tower. But, he eventually pulls himself up and wins the day, Rickey writes.

Bring your Valentine to enjoy this memorable comedy-romance! Walt Strony’s music will evoke the action and emotions on scene. You’ll feel surrounded by this unique silent film experience!