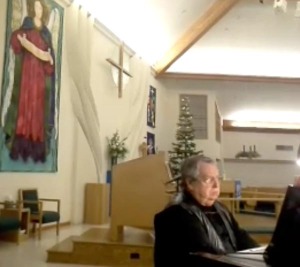 PEACE organist & pianist Paul Perry will be joined by two guest musicians for a recital at 7:30 p.m. Friday, Dec. 26, in the sanctuary. Sarah Skuster will play oboe and her husband, Eric Starr, will play trombone. Admission is by donation, but no one will be turned away for lack of funds. Proceeds to benefit  Hospitality House.

A local-boy-made-good is presenting a recital of classical music – plus a locally written, world-premiere rock piece – to benefit Hospitality House.

It’s an unusual opportunity to introduce aficionados of classical and rock music to each other’s favorite genre, said Eric Starr, a trombonist with the San Diego Symphony.

The program will begin at 7:30 p.m. Friday at PEACE Lutheran Church, 828 W. Main St., Grass Valley (near downtown). Admission is by donation, but no one will be turned away for lack of funds.

One hundred percent of the proceeds will benefit western Nevada County’s only homeless shelter. Hospitality House is supported by PEACE and more than 20 other faith congregations; earlier this year, Hospitality House opened Utah’s Place in Glenbrook Basin, providing overnight accommodations to 54 people.

Starr will be accompanied by his wife, Sarah Skuster, the lead oboist of the San Diego Symphony. Starr and Skuster also are music professors with studios at California State University, San Diego. Paul Perry, a staff musician at PEACE and co-founder and former artistic director of Music in the Mountains, will perform on the piano.

The program will include pieces by Schubert, Saint-Saens, Rimsky-Korsakov and Michael Head. Head is a living composer whose work is well-known among concert-goers. His pieces chosen for Friday’s recital are “whimsical and mischievous and as charming as can be,” Perry said.

The recital includes a world premiere composed for the trio by local rock composer Justin Hunt.

Hunt and Starr have known each other since middle school days at Seven Hills School in Nevada City. “Justin and I were and are both fanatical musicians, though he is a rocker and I am a classical musician,” Starr said. “It’s exciting anytime a composer writes a piece for you, but when it’s a friend whom you have been talking about music with for 20 years, it’s even more special…

“The oboe, trombone, piano combination is unconventional, to say the least,” Starr added. “But we think the combination is lovely and people will be pleasantly surprised.”

Hunt plays with the local band Pinnacles. He also has played with many others, including Casual Fog and sBach.

Starr was a student at Nevada Union High School and playing the euphonium in the school’s band program when he competed in Music in the Mountains’ Young Musicians Competition. Perry became his mentor, and Starr won the competition as a senior in 1998.

“Having excellent role models was very important for a small-town musician who grew up on a farm,” Starr said. “The competition was a formative event in my musical life. Having this type of event in such a small community is quite special. To have to prepare and perform solo works in front of a panel of judges and an audience in the final round of a competition cultivates important musical skills. A young musician gets a better understanding of the long-term preparation that goes into a comparatively short performance and how to deal with each aspect.”

Starr earned a bachelor’s degree in music from the University of Southern California, with additional studies at the Tanglewood Music Center and Aspen Music Festival; a master’s degree in music from the Cleveland Institute of Music; and a doctorate in musical arts from Stony Brook University, New York. He has played with such notable musicians as James Levine, Marvin Hamlisch, Renee Fleming, James Galway, Kool N the Gang, Burt Bacharach, Liza Minnelli, Dave Brubeck and Doc Severinsen.

He is the son of Philip and Anne Starr, owners of Sierra Starr Vineyard and Winery in Grass Valley.

Sarah Skuster has performed as guest principal oboist with the Indianapolis Symphony and the New Jersey Symphony. She also has been a substitute oboist with the Metropolitan Opera Orchestra and the Los Angeles Philharmonic. She earned a bachelor of music degree from the Cleveland Institute of Music.

It’s the second time the couple has performed in Grass Valley to benefit the homeless shelter.