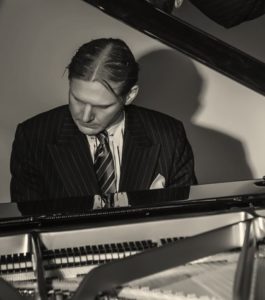 Frederick Hodges is a masterful pianist with a broad range of classical accomplishments. But this concert focuses on a special passion: ragtime – the revolutionary, syncopated music that swept the world from the 1890s into the first decades of the 20th century.

“A Fred Astaire Ragtime Revue” is a production of Arts @ PEACE, our effort to bring high-quality public events – both secular and sacred – to our community in western Nevada County.

Hodges will bring to PEACE a fun and unique Musical Revue celebrating the sophisticated and entertaining works performed by Fred Astaire during his stellar vaudeville career from 1905-1917. Astaire and his sister, Adele, were highly successful child actors who danced and sang on stages across the country. (And, according to Wikipedia, their mother was a Lutheran!)

You’ll hear comedy and songs written for Astaire by friends and fledgling composers such as Irving Berlin, Cole Porter and George Gershwin. In addition, Hodges will present images of the colorful publicity posters and the artistically decorated cover pages of the sheet music that fueled the spread of ragtime around the globe.

This FREE CONCERT will be followed by a reception in the Fellowship Center, where you can meet Frederick Hodges!

This event is a fundraiser for the Peace Organ Fund –   our effort to raise $240,000 to replace the aging organ in our Sanctuary and, eventually, install REAL PIPES! The result will be a musical experience unlike anything in western Nevada County: Air passing through real pipes reverberates throughout the space and fills listeners in a way that purely electronic sound cannot.

Why do we need to think about replacing our organ? The organ we have sounds good, especially under the hand of our fabulous organist Walt Strony. But it’s nearly 30 years old and nearing the end of its useful life. Imagine using a computer that’s 30 years old! That’s basically what we have: A computer connected to a keyboard console on one side and speakers on another. Our organ could stop working at any time, so we want to be prepared to replace it with an instrument worthy of our beautiful Sanctuary. PLUS, a new organ would take advantage of all the new technology now available, greatly expanding our ability to offer top-quality musical experiences at Peace Lutheran Church.