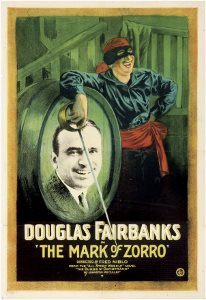 The film defined the action-hero genre and launched Fairbanks’ career in a new direction. It screens for free as part of the Silent Movies with Walt Strony series at Peace Lutheran Church, 828 W. Main St., near downtown Grass Valley.

A free reception will follow and feature hosts decked out in black capes.

“This is a fun film,” said Strony. “It’s got humor, romance and some good sword-fighting.”

Strony has accompanied “Zorro” many times at classic film festivals and many other types of venues across the country.  It is one of the most popular silent films being shown today, he said.

He will perform his own original score, which borrows musical themes from various Spanish and Spanish-inspired works such as “Malagueña” and “Andalucia” by Ernesto Lecuona, and “Capriccio Espagnol” by Nikolai Rimsky-Korsakov. Listeners also will hear numerous other familiar themes.

Strony has given each character in the movie his or her own theme. He said.  He will string together these familiar themes as he improvises the filler material. “I do my best to provide musical support so that each character can emote his feelings, since there obviously is no spoken dialogue,” he added.

The effect products an emotional impact akin to a live concert.

“Zorro” includes some amazing chase scenes in which Fairbanks performs his own stunts, Strony said. “These guys were really athletic as well as good actors,” he added.

No admission will be charged and no offering will be taken. However, donations to the church’s Organ Fund will be gratefully accepted. Last year, Peace launched a campaign to raise money to buy a new combination digital-pipe organ for its sanctuary.

Douglas Fairbanks, Marguerite De La Motte and Noah Beery Sr. defined the genre of action-hero/romance films in the 1920 “The Mark of Zorro.”

“Zorro” features a crusading hero, played by the multi-talented Fairbanks, set against a backdrop of southern California hills during the Spanish mission period. The story depicts a rich Californio dandy who, by night, dons a black mask and cape to fight corrupt and oppressive local officials. Fairbanks employed his substantial fencing skills to fine effect, with a healthy dash of the comedy that characterized his earlier film career. (“Zorro” was his 34th movie.)

Fairbanks had portrayed comic characters prior to “Zorro,” but the popularity of the romantic swashbuckler propelled him into a new direction and defined a genre. His later action films included two “Zorro” sequels, plus “The Thief of Baghdad,” “The Three Musketeers” and “Robin Hood.”

Like action heroes that came after, the dashing alter-ego “Señor Zorro” – or Mr. Fox, in Spanish – stirs the romantic interest of a heroine who remains unimpressed by the daytime fop Don Diego de Vega. Actress Marguerite De La Motte was 18 when she played the role of Lolita Pulido for the film. Earlier, she had trained with Anna Pavlova and danced for theater-owner Sid Grauman, who later built the iconic Grauman’s Chinese Theater in Hollywood.

Fairbanks wrote “Zorro” under the name “Elton Thomas.” (His given name was Douglas Elton Thomas Ullman; Fairbanks was the name of his mother’s first husband.) “Zorro” was produced by his production company, Douglas Fairbanks Pictures Corp.; and it was the first film released through United Artists.

The energetic and ambitious Fairbanks had formed the ground-breaking company in 1919 with actress Mary Pickford, friend Charles Chaplin, and director-producer D. W. Griffith to gain “complete control over the production and distribution of his films,” according to Kevin J. Hagopian of Pennsylvania State University. Fairbanks and Pickford married the same year he made “Zorro” and also operated a studio together. 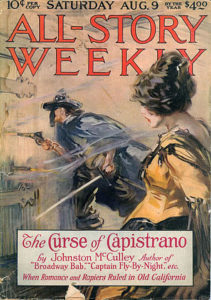 “The Curse of Capistrano” debuted in 1919 as a serialized novel, gained a clamorous following, and formed the basis for Fairbanks “Zorro” tale.  Author Johnston McCulley previously had worked as a crime reporter, according to historian and blogger David W. Rickman.

But Rickman points out some key historical inaccuracies that recur in all those iterations. The Alta California depicted in the film – set in 1820 – was very different from reality, he wrote on his blog, “Into History.” Perhaps most importantly, Mexico had declared independence from Spain in 1810 and was no longer under Spanish rule. In addition, the real Alta California of that period was much poorer than depicted in the film and unlikely to support the luxury of a Don Diego.

But for the purposes of any era’s action flicks, such details fall to irrelevance next to a rousing battle between good and evil.