Home > “Phantom of the Opera” screens for free Oct. 8 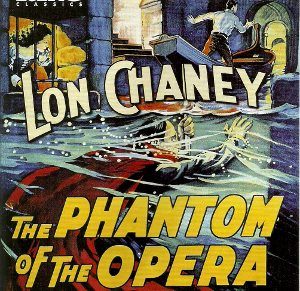 The 1929 edited version of “The Phantom of the Opera” shows for free at 4 pm Sunday, Oct. 8, at PEACE Lutheran Church.

“The Phantom of the Opera” remains the world’s most popular silent film. You can experience this silent classic the way it was intended – with live musical accompaniment – during a free showing in Grass Valley.

It’s the first time the film has been presented with live music in western Nevada County in recent memory. Organist Walt Strony will accompany the 1929 edited version of the film, starring the iconic Lon Chaney as the disfigured, love-crazed former magician who haunts the Paris Opera House.

In an unusual addition, PEACE vocalist and soprano Anne Vaaler will perform three operatic arias during the film. She will stand behind the projection screen to give the sense of the song coming from the film, Strony said.

“The Phantom of the Opera”

What: Silent Movies with Walt Strony presents the 1929 edited version

Donations will be gratefully accepted for the Peace Organ Fund. Earlier this year, the church launched a multi-year campaign to raise money for a combination digital-pipe organ to replace its existing instrument.

Music from the period

Strony plays for “Phantom” at silent film festivals across the United States. The American Theater Organ Society recognized Strony’s musicianship by inducting him into their Hall of Fame.

“Phantom” continues to inspire crowds, he said. “People have always loved “The Phantom,” since Day 1,” Strony added. “This is the No. 1 most-popular silent film ever released.”

Strony promises music “appropriate” to the film’s period, he said. Like many surviving silent films, “Phantom” has no official score or cue sheet dictating the exact music to be played.  Local musicians compiled a score using their own resources.

The film’s story unfolds during a production of Charles Gunoud’s opera “Faust” – so Strony may play some music from the film’s inspiration, he said.

Actor Lon Chaney stars in “The Phantom of the Opera.”

Based on the novel by Gaston Leroux, the 1925 silent classic stars Chaney as the disfigured Erik. The “phantom” lives beneath the Paris Opera House, tutors the aspiring singer Christine, played by Mary Philbin, and becomes obsessed with her.

To produce the ghastly facial effects, Chaney inserted fish hooks into his nose to flare out the nostrils, Strony said.

Critics panned the original 1925 version for its length (1hr 33min), Strony said. And, by 1929, “more effects were available,” he added. “They hand-colored a lot of the scenes. The ballroom scene is in Technicolor.”

Shorter, tighter and with some color, the recut “Phantom” thrilled audiences. “It was both the stepping-off point for Chaney’s run as a superstar at MGM and the prototype for the horror film cycle at Universal in the 1930s,” wrote Paul Brenner in “All Movie Guide.”

David Shepherd, the late film historian, restored the 1929 version that will be shown Oct. 8. “It was his life’s mission to restore silent films,” Strony added.

A sound version came out 1930. The complete version no longer exists, but lengthy excerpts remain, according to Kino Classics in New York, which released all three versions on DVD.

The ground-breaking set built for the Paris Opera House remained for 90 years at Universal Studios in Hollywood, part of the historic Stage 28 built in 1924. Universal removed the set for preservation before demolishing the soundstage in 2014 to expand its theme park, Ted Johnson of the trade publication Variety reported.

Facts behind the myth 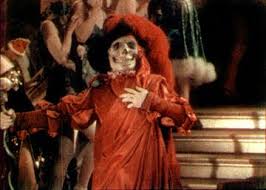 Actor Lon Chaney arrives at a masked ball dressed as “Red Death” in “The Phantom of the Opera.”

Audiences in 1925 knew the story by Leroux, who released a novel in serialized form from 1909-1010. “Le Fantôme de l’Opéra” came out as a book in 1910. Leroux – a writer of detective stories – in turn, drew on tales he had heard about Paris’ grand Palais Garnier opera theater, which opened in 1876.

More scraps of fact underlying Leroux’s story: Alcoves, arches and a large water tank do exist in the Palais Garnier’s cellar, the tank due to the high water table beneath the property. A counterweight from the hall’s great chandelier did fall in 1896, killing a construction worker. And, the Grammophone Co. made phonographic recordings, sealed and locked them in a cellar time capsule in 1907; they were opened in 2007, and the music was released by EMI, Lucinda Everett of The Telegraph reported.

About music at PEACE Lutheran Church