Home > News & Events > Take a “Leap of Faith” for the homeless! > Havens for homeless need our help

Donate to Leap of Faith by clicking here. 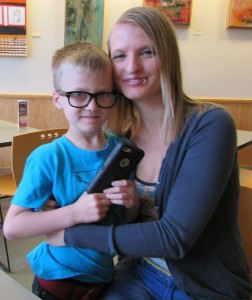 Brittany Kerr, 30, and her son Athan, 8, are among the homeless people offered stability at the Salvation Army’s Booth Family Center near Grass Valley.

The Booth Family Center used to be a motel, offering a haven on the highway between Marysville and Grass Valley. Across town, Hospitality House’s 54-bed shelter used to be a church.

Both still offer safety and nourish the body and soul – now, of homeless people on their way from chaos to stability.

But that precious path to stability faces serious financial challenges.

In July, a new funding framework in California will shift federal money for homeless programs from rural areas like western Nevada County to urban areas. It’s a response to state-of-emergency declarations in cities swamped with homeless camps that go on for blocks, social workers said.

As a result, Booth Family Center and Hospitality House together face budget shortfalls of $276,000, staff staid.

Some of that shortfall will be made up by a new thrift store, which may open as soon as April. But even with the store’s income, the budget hole still is projected to be $168,000, McDonald said. “For that, we’re counting on our generous community that cares so deeply for those in direst need,” she added.

“These are our brothers and sisters.” – Perry Studt, Peace Lutheran Church

The Booth Family Center is operated by the Salvation Army’s Del Oro Division. It housed 29 families in 2015, including 41 adults and 60 children. A grant of $108,000 pays for shelter operations, staffing and utilities – but “that is going away,” Social Services Director Sarah Eastberg said.

“Our families are less important and they have to move to huge cities to get some help?” Eastberg pondered rhetorically. “That doesn’t make sense.”

For many clients of these two organizations, the path to stability involves many small steps and a few U-turns. But clients get support all along the way.

“It’s definitely a path, winding every which way” as people repair and rebuild their lives, Eastberg said. Sometimes, they slip back into bad old habits when obstacles arise. “It is not a straight ladder to success.”

At Hospitality House, the hungry, the hurting and the out-of-luck can count on three meals a day, a warm refuge and a friendly smile. Clients can find help with budgeting, parenting, restoring their credit, learning work skills and finding a job. They can get help kicking addictions, finding medical care, signing up for financial aid and – in the best of cases — moving into a place of their own. 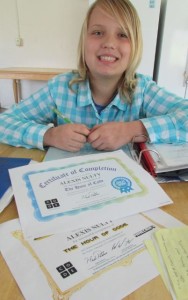 Alexis Nulty, 12, recently won two awards for computer coding projects at her school. She is thriving in the stability offered at the Salvation Army’s Booth Family Center for the homeless.

At Booth Center, families receive similar help – often after a stay at Hospitality House. They start the transition to having their own place by being responsible for groceries and cooking their meals. Families get counseling, set goals and are coached as they work toward those goals. Tutoring for children, schooling for adults, and savings programs and interview skills for parents, help form good new habits and get them ready for the working world.

Eastberg’s case management has included giving a boy rides to soccer practice, and allowing a pair of sisters to do homework in her relatively quiet office, she said.

The goal at both organizations is to get people out of shelters and into housing as soon as possible. That’s easier for single men and women, but often a rocky road for families, said Tom Kellar, one of three people at Hospitality House who works on housing.

Eastberg agreed and described the disappointment faced by her larger families at Booth. “No landlord is going to take a family of seven or eight. In the end, the kids are the ones who are denied the chance to have a home,” Eastberg said.

Though dysfunction may threaten detours, clients at both organizations have an important quality in their favor, staff said: a commitment to sobriety.

“Anybody who comes here, the first thing they face is the breathalyzer,” a test for alcohol use, said Kellar at Hospitality House. “People coming here are making a commitment to being sober. There is a sense of taking responsibility for their actions.”

Take a Leap of Faith to help the homeless 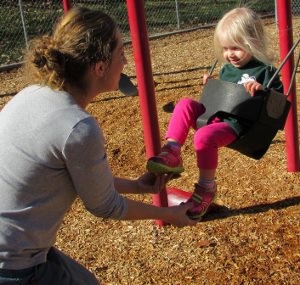 Abigail Nolan, 2, started out homeless. But with help from Hospitality House and the Salvation Army’s Booth Family Center, her family — including mom Ruby Nolan, 40 — soon will own their own home.

The Leap of Faith Matching Fund Drive, hosted by Peace Lutheran Church, will support these pathways to stability by replacing a small amount of the government grant money these organizations will lose.

The funding campaign was inspired by late Peace member Lee Renz. Her bequest to the church provided the original $10,000 for the match. Church leaders are asking the larger community of western Nevada County to double that gift of love.

“The people highlighted in these stories knew they were in trouble and sought help to make it back,” Studt said. “Through a gracious gift from Lee Renz, we at Peace now hope to enable all of our community to help these, our brothers and sisters, by sustaining the work of Booth Center and Hospitality House.”

“People coming here are making a commitment to being sober. There is a sense of taking responsibility for their actions.” — Tom Kellar, Hospitality House

Donate now to Leap of Faith