Hodges pays tribute to the genius of Fred Astaire 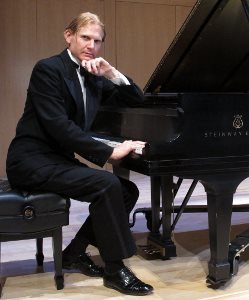 Frederick Hodges is a sought-after pianist with a broad repertoire of classical and early 20th-century music. At this free concert in Grass Valley, his focus will be ragtime – the revolutionary, syncopated music that swept the world from the 1890s into the first decades of the 20th century.

Our free piano concert will pay tribute to ragtime – the fun, infectious, yet sophisticated music that underscored the early career of the brilliant 20th-century dancer, Fred Astaire. Works will include songs written for Astaire by friends and fledgling composers Irving Berlin, Cole Porter and George Gershwin.

The first part of the show will feature musical selections Astaire danced and sang to during his vaudeville years. For the second part, Hodges will perform music from the period.

Hodges described his performance as “rediscovering what (the original composers) created and recreating it for others,” he says. During his performance, Hodges will share fascinating memorabilia from the ragtime period, including Astaire publicity posters, rare photographs and intricately illustrated sheet music covers from the pieces he performs.

Hodges is based in San Francisco and keeps a busy schedule of local, national and international performances. He has wowed audiences at the Sacramento Music Festival, the West Coast Ragtime Festival (also held in Sacramento) and the Scott Joplin Ragtime Festival in Sedalia, Mo. In addition, Hodges performs regularly at the San Francisco Silent Film Festival; the Niles Essanay Silent Film Museum in Fremont; the Hollywood Heritage Museum, the Cinecon Film Festival and the TCM Classic Film Festival, all in Hollywood; and at other music and silent film festivals around the country.  Hodges also appears on stage, television, radio and film.

A production of ARTS @ PEACE

This is event is free and is a production of Arts @ PEACE – our church’s effort to bring high-quality cultural events, both sacred and secular, to our community in western Nevada County.

Any donations will be gratefully accepted and will benefit the PEACE Organ Fund. The church is raising $240,000 to replace the aging organ in its sanctuary and, eventually, install real pipes connected to the digital instrument. The result will be a musical experience unlike anything in western Nevada County: Air passing through real pipes reverberates throughout the space and fills listeners in a way that purely electronic sound cannot.

Hodges describes ragtime as African dance rhythms performed by American slaves and picked up by European-American musicians. “They took up those rhythms and applied them to standard European musical forms such as waltz and march,” Hodges explained. “Ragtime follows the standard European structure and melody, combined with African syncopation.”

The word “ragtime” itself followed the same formula. Waltz-time is three-quarters, and march-time is four-four – referring to the number of beats per measure. Immigrant composers relished the off-the-beat, or syncopated, treble notes reflecting the African rhythm and called it “raggedy time,” according to a history of the genre written by the Library of Congress.

It quickly spread across the country and beyond. “Ragtime was the first form of popular music that America created that spread throughout the world,” Hodges said. While ragtime reached its heights in the first two decades of the 20th century, America’s best composers continued to write in that style through the 1950s, he added. “Ragtime evolved into the popular songs, jazz, blues, boogie-woogie, big band, and even early rock’n’ roll,” Hodges added.

“I took to ragtime because it’s just such high-quality music!” Hodges says. Ragtime offers “a very virtuosic style” that demands as much from the performer as the classical tradition in which he trained. “It’s such a rich resource of music to discover and play,” he says. “I always enjoy a technical and artistic challenge.”

When audiences hear it, “they gravitate to it,” Hodges adds.

“I’m rediscovering what (the original composers) created and am recreating it for others,” Hodges says. “It’s so much fun for modern audiences to hear it live!” 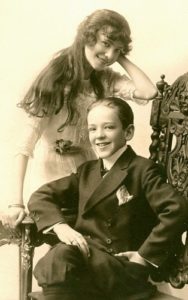 As children, Adele and Fred Astaire had a wildly successful partnership in vaudeville from 1905 to 1917.

Astaire still is remembered for his mid-century movie career, especially with dance partner Ginger Rodgers. But Astaire started his career with his sister Adele, dancing and singing as children on vaudeville stages across the country from 1905 to 1917. Fred was 6 years old when he started dancing professionally; Adele was three years older. They saw enormous success, and eventually transitioned to Broadway and later film in a partnership that lasted until Adele married in 1932.

Fred Astaire was recognized throughout the creative arts for seeking perfection in every step, his diligence in rehearing and his technical prowess. He met composer George Gershwin when they were both 17, and Gershwin composed for Astaire knowing he would make the most of the music, Hodges said. Contemporaries including Frank Sinatra and Bing Crosby considered him the gold standard for his craft, according to published reports.

Astaire went on to influence the greatest dancers of the century, including Rudolf Nureyev and Mikhail Baryshnikov, and great choreographers including George Balanchine. He was also a fine singer, actor and choreographer, and he appeared in more than 40 films, plus television shows.