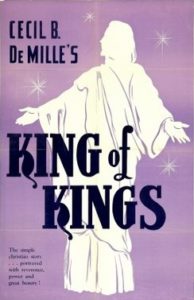 “The King of Kings” – Cecil B. DeMille’s classic silent film depicts the life and passion of Jesus.

See silent film the way it was meant to be: with live musical accompaniment!

“The King of Kings” – director Cecil B. DeMille’s silent film classic portraying the life and passion of Jesus – comes to Grass Valley just as Lent starts.

Nationally acclaimed organist Walt Strony will accompany the film’s 1928 general release edition. His score draws from “a range of composers,” including Wagner and beloved Lenten hymns. Among his selections will be Handel’s “Hallelujah Chorus.”

The combination of live music, a live audience and DeMille’s spectacular yet sensitive portrayal of the life of Jesus of Nazareth remains uplifting 90 years after its debut, Strony says.

“My job is to choose music that underscores the emotions the actors are trying to evoke,” Strony explains. “I’m a bridge between the actors and the audience.” The impact moves audiences to tears, he adds.

The free screening starts at 4 p.m. Sunday, March 24, in the Sanctuary at Peace Lutheran Church, 828 W. Main St., near downtown Grass Valley. A reception will follow.

“Next to the Word of God, the noble art of music is the greatest treasure in the world.” – Martin Luther, theologian, reformer & composer

DeMille took pains to tastefully portray Jesus, his crucifixion and even the religious leaders who persecuted him. Don’t expect gore a la Mel Gibson, Strony said. In addition, Strony has carefully chosen music to evoke the emotions being portrayed by the actors. The combination offers a rare opportunity to experience silent movies as they originally were intended.

“Anyone who has read even just one page of the Bible will be crying by the end of the film – it’s that powerful emotionally,” Strony said. 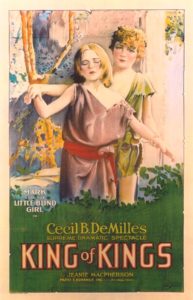 One of the original posters from “The King of Kings” 1927 release depicts the little blind boy Jesus heals.

His favorite scene depicts Jesus healing the little blind boy. Through the child’s healed eyes, the audience sees Jesus’ face for the first time – a fitting metaphor for coming into spiritual vision in any era.

When DeMille started the project in 1926, high-brow critics dismissed him as a showman who appealed to the uneducated. But DeMille saw the big screen’s potential to deliver his viewers “seventy-five million Bibles.” He cited a survey of college students revealing that “60 percent did not know what Christ meant by ‘Love thy neighbor as thyself.’…

“This next generation will get its idea of Jesus Christ from this picture,” biographer Robert S. Birchard quotes the director as saying.

Screenwriter Jeanie Macpherson worked 16-hour days and was devoted to “precise detail” in following scripture, according to Daniel A. Lord, S.J., the film’s official advisor from the Catholic Church.

One curious exception: DeMille insisted on a reference in the film to a romance between Mary Magdalene and Judas Iscariot. Lord attributed that to “some … little-known German legend of the Middle Ages.”

“The King of Kings” kicks off a year-long campaign to replace the aging organ at Peace Lutheran. The current digital instrument resembles a 25-year-old, out-of=date computer. The proposed new organ would offer a wider range of musical styles, improve sound in the sanctuary and could accommodate real pipes.

Donations to the organ campaign will be gratefully accepted. However, admission to the film is completely free, and no offering will be taken.