Famous train scenes of “The General” set to live music

A steam locomotive chugs toward disaster – with our hero’s fiancée aboard!

“Silent Movies with Walt Strony” presents the 1926 action-comedy-romance featuring one of the greatest train-wreck scenes in film history. Though the picture was panned after its release and bombed at the box office, critics now consider it a silent-era classic.

“‘The General’ is a wonderful film. It’s got comedy, it’s roughly historical, there’s a little love interest going on,” said organist Walt Strony. “It’s fun, and everybody will enjoy it.”

Strony – a nationally recognized master at accompanying silent films – will play classical and period music during “The General.” Works will include “The William Tell Overture,” “Battle Hymn of the Republic,” “Dixie” and more.

Strony, of Grass Valley, is the staff organist at PEACE. Every Sunday morning worship service is like a concert! In addition, Strony plays at silent film festivals across the United States. For many silent films, he creates his own score, cobbling together works that evoke the emotions of actors and action. But unlike many silent-era films, “The General” comes with an original cue sheet that guides theater musicians in the selection and timing of music, Strony said.

What: “The General,” the 1926 classic silent film by Buster Keaton and Clyde Bruckner

Special info: Tax-deductible donations to the PEACE Lutheran Church Organ Fund will be accepted gratefully in the basket in the church lobby.

“The General” is the second silent movie Strony has presented since locating to the area two years ago. In March, he accompanied “The King of Kings,” 1928, to an enthusiastic audience.

“I’d really like this to become a major, classical happening here in Grass Valley, that we can continue to expose people to the variety of wonderful silent films that were made,” Strony said.

Admission to the film is free.

This event supports a fundraising campaign to replace PEACE’s aging digital organ with a combination digital-pipe organ. (Imagine using a computer that is nearly 30 years old!)

Keaton’s “The General” is based on a true story that would have lived in the memories of oldsters of his time: “General” was an American-type steam engine built in 1855 as No. 3 for Western & Atlantic Rail Road, based in Georgia.

The Great Locomotive Chase of 1862 commenced when Union spies sought to disrupt Confederate railway networks by stealing “General.” Pursued by W&ARR No. 49, “Texas,” the engine eventually ran low on wood and water, slowed to a stop, and the Union forces abandoned it.

Seven of the Union raiders were hanged in Atlanta as spies. The Congressional Medal of Honor was created that same year, and four of the raiders were the first to earn it. 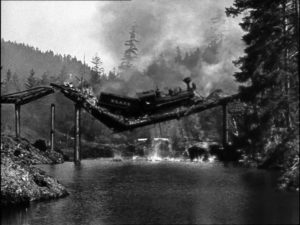 “The General” features one of the great train wreck scenes in filmmaking history. 4pm June 11 at PEACE Lutheran Church – with live music performed by Walt Strony.

Today, “General” is preserved at the Southern Museum of Civil War and Locomotive History in Kennesaw, Georgia. It is listed on the National Register of Historic Places.

Keaton, who co-directed “The General,” used two Civil War-era engines to film in pine forests near Eugene, Ore., biographer Marion Meade wrote in 1997. He sent a third engine hurtling down a canyon for the wreck scene; it drew tourists until salvaged for iron during World War II, Meade wrote.