Home > News & Events > Blessing of the Animals set for Nov. 3 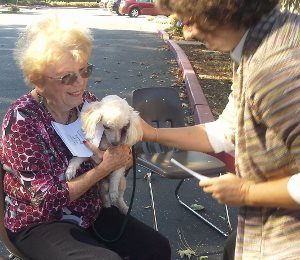 Animals (and their humans) can receive a blessing on Oct. 15 at PEACE Lutheran Church.

PEACE Lutheran Church will celebrate with a short and simple service of prayer and blessing at 2 p.m. Saturday, Nov. 3, in the church parking lot at 828 W. Main St., near downtown Grass Valley.

Fluffy, Fido, fish and farm animals all are welcome. Humans also may attend – so long as they are accompanied by a responsible animal.

This fun and informal event commemorates St. Francis of Assisi, whose feast day was Oct. 4. St. Francis is the patron of animals and those who promote environmental consciousness.

Prayers will be said under the trees. Then, folks will be invited to come forward with their pets for a laying on of hands. Treats will be provided.

Lutherans are not typically known for recognizing those canonized by the Catholic Church, but Lutherans do love creation. Historically, many of the first Lutherans were peasants in Germany. Today, many still work in agriculture.

The Evangelical Lutheran Church in America recognizes Francis as a “renewer of the Church.” Recently, a “Blessing of Animals” was included in the Rites of Autumn in the church’s liturgical resource, used across the country and at PEACE. The prayer service proclaims God’s “covenant of mercy… with every living creature.” 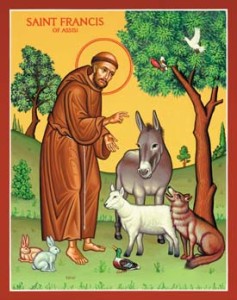 Giovanni di Pietro di Bernardone was a rich, Italian party-boy born in Assissi in the late 1100s. During a battle, he became a prisoner of war, according to Bio.com. Legend says that, while waiting for his father to pay his ransom, he heard the voice of God calling him to empty his life and be an example of love and service to all.

As St. Francis, the former gadabout became an ascetic. Francis loved nature, seeing it as a mirror of divine majesty. He spent months each year praying in mountain caves, according to the Catholic Encyclopedia. His “Canticle of the Sun” depicts the very elements singing God’s praises.

Legends claim Francis preached to birds and fed hungry bees in the winter. He appealed to a wolf that had been marauding villagers’ sheep. After obtaining the wolf’s agreement to stop, and persuading villagers to feed the predator that “had done evil out of hunger,” Francis blessed the animal, according to “Little Flowers of St. Francis,” an early hagiography.

In 1224, Francis “wished to persuade the (Italian) emperor to make a special law that men should then provide well for the birds and the beasts, as well as for the poor, so that all might have occasion to rejoice in the Lord,” the Catholic Encyclopedia reports.

Pope Gregory IX, who as a cardinal knew Francis, proclaimed him a saint in 1228, two years after his death.

‘All God’s creatures got a place in the choir’

See a video set to Makem & Clancey’s famous rendition of “A Place in the Choir,” composed by Bill Staines.

The poet Dante and the painter Giotto, among others, picked up the theme of Francis’ love of nature and the poor.

In modern times, Francis’ life has been popularized in novel and film. In 1979, after a decade of growing activism in Europe and the United States concerning pollution and environmental destruction, Pope John Paul II proclaimed Francis the patron saint of those who promote environmental consciousness.

Yet Francis was not what today we would call an environmentalist, Franciscan Keith Warner wrote for U.S. Catholic in 2012; “His example really points to a mystical or a spiritual vision for all of the creative world as brother and sister.”

Francis is “an example of someone who prayed in nature and discovered more about God and himself… (growing) more fully into the mystery of God,” Warner wrote.