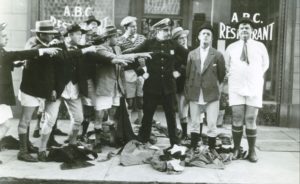 This restored version of Laurel and Hardy’s 1927 smash “The Battle of the Century” includes the once-lost cream-pie melee.

A long-lost cream-pie melee scene will be shown among three film classics, presented with live musical accompaniment, in a “Silent Film Medley.”

Internationally renowned organist Walt Strony will perform live music to accompany the films. Strony will perform music that audiences of the era would have heard. His work evokes the action and emotions portrayed on-screen. Plus, he performs on his own Walt Strony Signature Series theater organ, which he designed for the Allen Organ Co. of Pennsylvania.

Silent Movies with Walt Strony presents the 1927 smash “The Battle of the Century,” with the  hilarious, but long-lost fight scene that allegedly consumed 3,000 cream pies. Comic due Stan Laurel and Oliver Hardy forged the visual icon of a cream pie in the kisser with this Clyde Bruckman classic. Our performance marks the regional premiere of the restored film. The cream-pie throw-fest was on the film’s second reel, But, that reel was lost early in the film’s history, except for a few fragments. Thankfully, a copy of the second reel surfaced and was first shown at a Library of Congress-sponsored film workshop in 2015, according to Dissolve writer Keith Phipps.

Medley includes French classic “A Trip to the Moon”

The sweet, science-fantasy-adventure film “A Trip to the Moon” dates to 1902. French genius Georges Méliès directed and released this classic as “Le Voyage Dans la Lun.” His ground-breaking work found inspiration in the science fiction of 19th-century novelist Jules Verne. 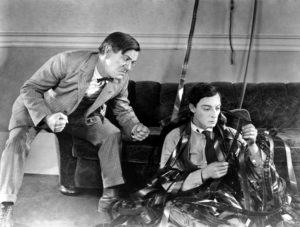 PLUS – Strony also will accompany the 1924 hit “Sherlock Jr.” starring Buster Keaton. A third film in this “Silent Film Medley” will be announced. The three films and Strony’s comments on each will run about 1 hour 20 minutes.

Admission is by donation, and a free reception follows the films. All donations received will benefit the Peace Organ Fund. Donations are 100% tax-deductible.

A new organ for Peace & the community!

PEACE Lutheran Church is raising money to replace the aging digital organ in its sanctuary – basically a 30-year-old computer. Music in our sanctuary forms part of the foundation of our worship. Plus. PEACE opens its sanctuary to secular community groups for performances.

In addition, Peace has launched a Go Fund Me campaign for the organ’s replacement.