Buster Keaton stars in “The General” 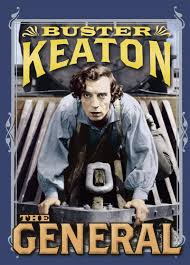 This 1926 classic movie — “The General” — may be the best action-comedy-romance of the silent era! Now, you can experience this epic adventure the way it was originally intended: with live musical accompaniment!

Organist Walt Strony plays every Sunday at PEACE Lutheran Church. Now, he brings to western Nevada County his special talent for interpreting musically the great silent movies with our new silent movie series. Presented in the Sanctuary, Strony’s music evokes, highlights and amplifies the emotions portrayed by the actors.

In the days of silent film, music was a key part of the performance. Musicians selected works from classical and popular works to evoke excitement, fear, love, danger, battle, chase and many other emotions and occurrences in the film. Few movies had their own score — although “The General” did have a cue sheet, Strony says. Strony does follow the original cue sheet to give audiences an authentic experience of this silent-era gem.

In “The General,” Keaton plays a Southern locomotive engineer during the Civil War whose fiancee is aboard a train that Union soldiers hijack! He chases after it using a range of means. Spoiler alert: The train wreck scene near the end still is considered one of filmmaking’s great technological achievements!

A free wine-and-cheese reception in our Fellowship Center will follow the film.

Strony will accompany “The General” on our aging Allen organ. Yes, it still sounds great! But… It’s like having a computer that’s going on 30 years old. It’s way out of date, has few options and it could break down at any moment!

New options available through more advanced technology could expand our possibilities for worship music, concerts and community events such as silent movies with live accompaniment.

Pipe organ – Perhaps most exciting, PEACE is planning for a new organ that could, in the future, accommodate pipes. As good as digital sound can be, it misses some of the qualities of a real instrument. Real pipes issue a “shushing” sound as stops open and close, and air moves through the valves, Strony explained.

We are excited about the possibilities for:

We hope you would come and enjoy “The General” for free. If you would like to donate to our PEACE Memorial Organ Fund, click here or leave a donation at the event in the basket at the entrance to the Sanctuary. Make your check payable to “PEACE Lutheran Church” and write “Memorial Organ Fund” in the memo line. No offering will be taken for the film.