Say NO to racism!

Everyone interested in what we can do in Nevada County to end racism is invited to a series of workshops starting at 9:15 a.m. Wednesday, Sept. 2, at PEACE Lutheran Church in Grass Valley. 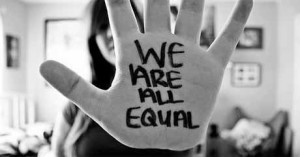 Thanks to raiderrelease.com for the image.

“Dismantling Racism” will present four weekly sessions of 90-minutes each, with facilitators and an invitation to talk, to examine ourselves and our communities, and to consider action. The sessions are free and open to all.

Julie Hettig, from Faith Lutheran in Meadow Vista, and the Rev. Deborah Butler from Hope Lutheran in El Sobrante, will be the presenters. Both have presented anti-racism workshops in the area.

Coffee and baked goods will be served at 9 a.m. each Wednesday. PEACE is at 828 W. Main St., near downtown Grass Valley.

The workshop at PEACE is part of a larger effort by the Evangelical Lutheran Church in America to confront racism at the local level. It comes in the wake of the June shootings of nine African-Americans in Charleston, S.C., during a Bible study session.

The suspected shooter in the Charleston, SC, incident was Lutheran, and two of the victims were graduates of ELCA Lutheran seminaries. ELCA Bishop Elizabeth Eaton said this after the shootings:

“It has been a long season of disquiet in our country. From Ferguson to Baltimore, simmering racial tensions have boiled over into violence. But this … the fatal shooting of nine African Americans in a church is a stark, raw manifestation of the sin that is racism. The church was desecrated. The people of that congregation were desecrated. The aspiration voiced in the Pledge of Allegiance that we are “one nation under God” was desecrated.

“Mother Emanuel AME’s pastor, the Rev. Clementa Pinckney, was a graduate of the Lutheran Theological Southern Seminary, as was the Rev. Daniel Simmons, associate pastor at Mother Emanuel. The suspected shooter is a member of an ELCA congregation. All of a sudden and for all of us, this is an intensely personal tragedy. One of our own is alleged to have shot and killed two who adopted us as their own.”

Click here to read Bishop Eaton’s full statement in response to the incident.