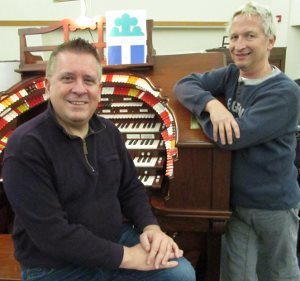 “Dueling Organs & More” will include many French and French-inspired works in this one-of-a-kind spectacle. Admission is by donation. A free wine-and-cheese reception follows the concert — a great atmosphere for socializing! The concert is at PEACE Lutheran Church, 828 W. Main St., near downtown Grass Valley. This is a production of Arts @ Peace, the church’s program of high-quality cultural events. All donations benefit the PEACE Organ Fund.

Music will include works by composer Louis Vierne, the most famous organist at Notre Dame Cathedral in Paris. Other works by French composers and inspired by Parisian culture will make this an exciting and unusual performance.

Music will include “a major segment of music from Andrew Lloyd Weber’s ‘Phantom of the Opera,’” Strony added. The duo also will offer selections from the 1968 musical “Jacques Brel is Alive and Well and Living in Paris” and works by Edith Piaf, the French singer, songwriter and actress of the later 20th century.

Strony and Greathouse will perform on two organs, including Strony’s own Walt Strony Signature Series four-keyboard instrument, which he designed for the Allen Organ Co. of Pennsylvania. They’ll also perform on a Baldwin grand piano; works will include solos and duets.

Stony was inspired to feature French music after a fire damaged the Parisian cathedral in April. “While the entire program will not be French, a major portion of it will be devoted to the music of France, from the cathedral to the Paris Opera House – and the sewer beneath it! – to cabarets and the can-can,” Strony said.

PEACE Lutheran Church is raising money to buy a new organ capable of playing real pipes! This organ would prove a cultural asset for the entire community, with the church’s location in the state-designated Grass Valley-Nevada City Cultural District. The congregation offers both secular and sacred performances throughout the year; plus, the facility is available for community groups and private affairs.